The National Waste Report (November 2018) describes Australia’s national performance on waste and recycling for the 2016-17 financial year. The Report presents data and commentary on waste generation, recovery and fate for all waste streams and various material categories. It also analyses this information by jurisdiction and on a per capita basis.

Prepared for the Department of the Environment and Energy,  the latest report is the culmination of two years of work by Blue Environment in obtaining data from the states and territories.

What the Report Covers

The report covers waste generated or managed in Australia. Different parts of the report cover different types of waste. Most of the report focuses on core waste – materials generally managed by the waste and resource recovery sector, comprising solid non-hazardous materials and hazardous waste including liquids.

The Report looks at the waste management method, including the infrastructure that treats it (landfill, compost, alternative waste treatment) and waste fate (disposal, recycling, energy recovery and long-term storage.

Some of the Report findings were:

You can read the full National Waste Report here. 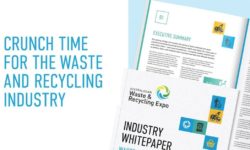 Recycling Sector Set to Back PM with Jobs and Investment Push